APOLOGY FOR PAST FORCED ADOPTIONS (policies and Practices . . . .)

parts of the speeches

an extract quote from Hansard -:

“In many cases the babies were forcibly removed by practices that were unethical, immoral and unconscionable. Young mothers were routinely compelled, coerced and given no realistic choice other than to relinquish their babies for adoption. Their birth experiences were often brutal and highly traumatic. We have all heard or read the many harrowing accounts from mothers who were subjected to the use of shackles and drugs or had blankets and pillows placed over their faces. These vulnerable young women were denied information and freedom of choice. They were bullied and victimised by the very ones in whom they were expected to place their trust, including medical and legal personnel and welfare officers. Many never saw or held their child. They have understandably been traumatised ever since.”

Mr ANDREWS (Leader of the Opposition) — I rise to add to the eloquent words of the Premier and to speak in support of his motion.

To acknowledge the tragedy you have endured I must affirm one simple rule — that is, to prematurely separate a mother and her newborn child against their will is to pervert the order of nature and to betray the basic tenets of civilisation. That any government or any profession might violate this rule is a concept deeply unsettling to comprehend. It is wrong, it is inexcusable, and the violation of this rule is a principal test for the health of any society. We failed that test.

We failed that test when doctors would lull young women into medicated delirium, press them into submission and undertake the procedure with a cold and clinical urge.

“We will always remember, because to forget is to discredit the courage of so many — the many affected who came forward with their stories, who revealed their broken lives, who exposed the acts committed inside our hospitals and institutions and demanded that they cease. If we failed society, then they restored it — those mothers and children who  . . . . . . . . . . .. …… . . .   asked us to read the darker chapters of our history.”

” These are women who gave birth while tied to a bed, who had sheets and pillows affixed to their face so they never saw their baby. These are women whose only concept of their first child is an infant crying behind a hospital curtain.”

This is an extract of the full Victorian Government apology. 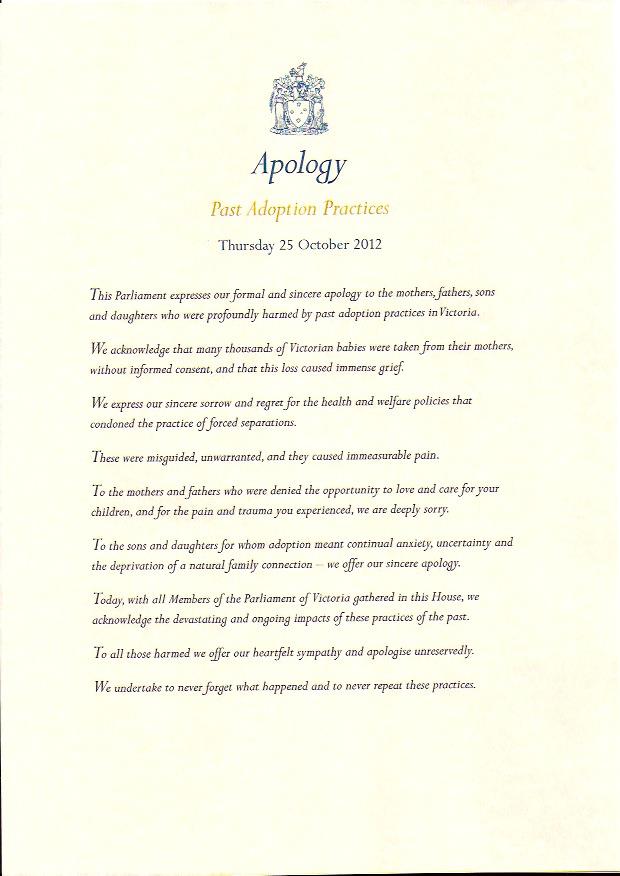